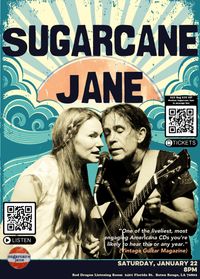 Sugarcane Jane is made up of Anthony Crawford and Savana Lee. Crawford spent years as Neil Young's guitarist, along with stints playing with Vince Gill, Steve Winwood, Dwight Yoakam & countless others. Lee has a stellar background in music production and the combo of the two was a natural....so much so, that they became a professional and a romantic couple. Three kids later, the couple and the music are both better than ever. Reg seats for the show are $25, VIPs are $35 and can be paid at PayPal.me/reddragonlr Mention Sugarcane in message line